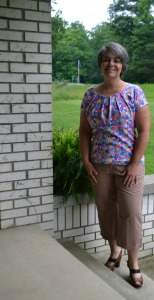 Last month was without a doubt my most productive sewing month ever. It also was a month I worked at my “outside” job more than normal…so how they both managed to happen is still a bit of a mystery to me. But, between those two things nothing much of anything else even came close to being done: read that as massive amount of weeds in all the flower beds and a house that needs a good cleaning.

However, in June I pretty much perfected organized sewing. Although I have a CONFESSION here; I have already regressed to my pre June 1st sewing habits and predictably am accomplishing a lot less this month.

But June, I was forced to get my sewing act together or be kicking myself at the end of the month;

1. It was Indie Pattern Month over at the Monthly Stitch. I managed to make garments for two of the four weeks (I wanted to do all four, but frankly ran out of steam). I did not realize until well in to the second week that entries could be made anytime after May 1st!! I definitely will remember that for next year.

2. I volunteered to pattern test, not 1, not 2, not 3 but 4 patterns for three different designers. Three of the four had 1 week deadlines. This my sewing friends I DO NOT recommend. While I love all the designers I tested for and am very happy with the results it was a lot of pressure. If I make a commitment to pattern test, I do my very best to keep it, no matter what, which led to a slew of super late nights due to my work schedule.

3. In June I worked more hours than in the previous two months combined. The job is at one of those mega home improvement stores and spring is the busy season. There are, after all, fabrics and notions and general sewing goodies that have to be purchased…with money.

Here’s the thing though. Projects that would have been really difficult for me a mere 6 months ago came together with ease. Yes, there were mistakes and seams ripped. At one point on a lined sheath dress I became all discombobulated and turned the dress in and out through the shoulders about 1/2 dozen times. Then I sewed the lining to the wrong side of the zipper teeth on same dress covering the zipper up. A real “duh” moment. I think that was at about 2 am. All and all though nothing major and techniques such as a fly front zip were completed like I was an old pro. I actually had a lot of fun.

And here’s another thing. Everything turned out decent. Well, actually better than decent. Downright good. I actually think I can sew!!

After June, I am 100% certain of one thing. Organization is the key to good productive sewing. For me anyway. I had a plan and worked it! And, it worked!! I started by noting the due date of each item, printing the pattern, reading through the directions then choosing the fabric I would use (this sometimes was the hardest part). I made sure I had all the supplies and notions and set them aside in a small ziplock bag. I prewashed my fabrics. On certain evenings I would tape and cut my patterns. The following mornings I would cut the cloth. Then in the same evening after work I sat down to a machine that had the correct thread and two ready bobbins and began to sew. If there was a technique I was unsure of, I looked it up prior to sewing. The last step was scheduling my daughter to take photos. Understandingly designers like super pictures of their designs. And, well, that little detail sometimes ain’t all that easy. Your daughter has unexpected plans. It rains. You forget. Things. Happen.

Aside from a scheduling bump here and there or just exhaustion on my part it all went pretty well.

The month began with what seemed like a pretty intense sew for me. In retrospect it wasn’t all that difficult just time at the machine and understanding a few things about gathering.

The Dorothy Lara Dress by Decades of Style.

I have long admired this dress but have shied away worried about fit and the mock smocking. But the week 1 category of IPM was dresses so I took the plunge. This one took me a while because there is a LOT of stitching to secure the gathers which are on the front and back bodices and skirt panels. I used a vintage rayon which sewed up with no issues. This is a nice pattern but probably not for the beginner.

Now to some pattern tests: The Angelica shorts from Itch to Stich.

Okay, I am not gonna lie, I love, love, love this pattern. The pattern comes with three views. I made view C. It’s the outstanding details that makes these shorts. Oh, and the super clear pattern instructions, oh and the simple fact they are COMFORTABLE.

Kennis has an eye for designing. I think she excels in making simple additions to the details that turn a garment from ho hum to something special. And she explains them in such a way a sewing “babe” can understand. I would recommend a muslin first if you are over a size 6 or 8. I found that I could come down a size (and possibly two). These shorts were paired with a Genevieve top and became my entry in week 2 of Indie Sewing Month – the Separates Category. I am proud to say I made it to the final 15!

About the Genavieve, (this was not a pattern test). This is a lovely pattern but I used a poly shantung for both the front bodice and the back and where the garment joins together at the front dropped shoulder seams it didn’t come out so well for me. I have since looked at others versions and see a knit and woven are used in combination. I have never been a great fan of this combo but want to give this one another chance. This pattern has lots of potential. Also, I recently came across a SAL for the pattern which I will follow next time. Below is the separates combo submitted for Indie Pattern Month.

Next up came the Lilly Dress.

Deby at So Sew Easy has outdone herself again! This dress is such a classic design and finishes so beautifully. I say this almost everytime Deby releases a new pattern but this one is my favorite of hers so far. Deby usually does knits but this fully lined sheath (using a super easy technique) is one heck of a woven pattern. Pattern is due out mid July so check back here for a full review then!

K…now the Kathryn top. The Kathryn was designed by Kennis to compliment her Angelica shorts. I made a cream version and a floral. Cream to go with my shorts. 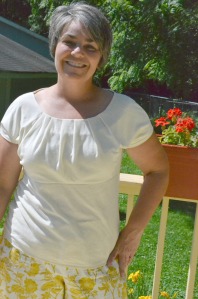 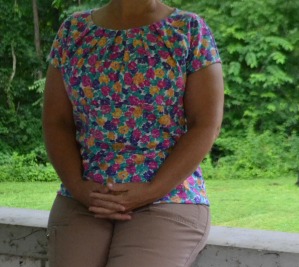 The floral is a thrift store find from many years ago and came so very close to being donated just a week before it was used for the Kathryn. There is something about sewing this blouse that makes me so very happy.  The pleats, they way the neckline facing is fashioned, the gentle curves at the seams, the sleeves. No kidding, I feel joyous when I am sewing this garment!

The last garment test was for Muffin Head Patterns. A very classic A line skirt with a vintage vibe.

My version is below and did not turn out as beautiful as the one above though no fault of the pattern. I just think I could do better so this one will be a take two for sure. There were three things about this skirt that I really loved. The manner in which the waistband attached, deep pockets and a deep 2.5″ hem. The skirt below was made in a pink cotton/linen blend. Simply put, this skirt is a wardrobe stable. It would be easy to add a lining and would sew up nicely in a variety of fabrics. The pattern sells for a very reasonable price $6.50. The possibilities here are only limited by one’s imagination. 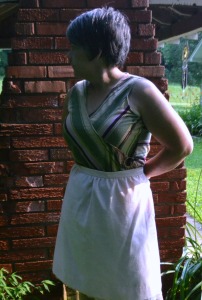 Are we done yet? Almost. Two more things. My son needed some new swim trunks and I needed a bathing suit. I was going to use the Bombshell by Closet Case Files as my IPM week 3 – New to Me.

I managed the muslin below in orange but then it was the end of the month and June was almost over and phew….I was tired.

But here’s to a super sewing June,lots learned and a tremendous boost of confidence for my ability to get-R-done! Ta-Dah!!!!