For a couple years now there has been this fabric in my stash, a black linen blend with pink embroidered Flamingos. 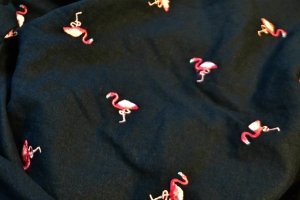 Although I can’t be 100% sure (because I am over 50) but I am fairly certain this fabric came from one of my resale shop fabric buying sprees. I am however, 100% sure of this; it is not a fabric I would have paid full retail for, well scratch that, would have ever bought period as a single piece. It most likely came in a big black garbage bag full of fabric remnants where you get what you get.

And sometimes that is good but mostly it is bad which is why I stopped buying fabric that way.  In my stash is a tote of what I call, “the cast offs”. Not that I will never use those fabrics, because I am an optimist and also in my daughter’s words, a HOARDER (what does she know?), but it is fabric that, let’s just say, is not on the A list.

When you’re 50 years old pink Flamingos can have sort of a negative connotation, picture gray hair, lots of sunshine, beaches, slow drivers, and plastic pink Flamingos. Lots of them, lined up. You get the idea. Some might use the word tacky.

It is not that I fear aging. I don’t. I just want to think I am aging with grace and style and that is why black linen fabric with embroidered pink flamingos kind of scares me. 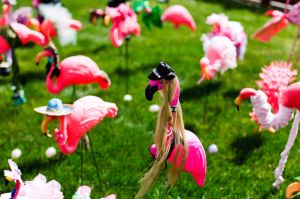 But, I will admit I sorta liked the fabric.  Periodically, I would take it from the cast off tote and bring it in to my sewing room and think about what I could sew.  But that had more to do with fabric content than fabric design. I am somewhat of a linen hound.  When I was young while my Mom wore the latest polyester styles in pants suits she dressed me in the most glorious natural fibers, ones that wouldn’t “itch” with linen and cotton being the mainstays. To this day I still struggle with some synthetic fibers and if they have a lot of poly, forget it. So I would look at the flamingos, think about it a bit, pull out some patterns, ultimately say no to it all and put the fabric back in the cast off tote.

This was a fabric that demanded a certain type of pattern yet I had no idea of what that pattern might be. On numerous occasions I thought about donating the fabric and once put it up for sale online, but alas there were no takers.

Then the Monthly Stitch team determined the April theme of “Put a Bird on it”. Well, I had a bird fabric didn’t I? Now it was time to get serious about sewing up the pink flamingos. It took me 3 weeks in to April to find the right pattern. I stumbled across The Amelia Dress by Green Bee Patterns while on a fabric website. It was love at first sight and I immediately knew my fabric had finally met its match.

This is a fabulous little dress that sewed up quick and easy. No lining, no fussy sleeves, a simple waist. Perfect for spring and summer! It is a humble little dress pattern but that is just what my flamingos needed, some humility. It is a flirty dress pattern and that is just what the flamingos are, flirty! The pattern makes the flamingos young and the bias cut gives them a bit of funkiness. 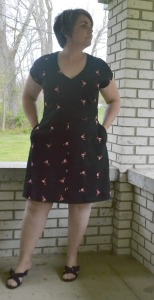 I am delighted the flamingos don’t have to go back to the cast off tote. Happy they found a home on this sweet Amelia dress.

P.S. Please join us over at Sew A Longs and Sewing Contest, a fb page of like minded sewists who are interested in SALs, sewing contest and occasionally coming together to sew something spectacular!