After black and white there is RED. Perhaps the most influential color in history, red has been used by Cardinals, Communist, Conquerors and Kings to signify status, bloodshed and dominance. The color of blood, it symbolizes life force, strong emotions and boldness. It is intense, like fire, and is often used to warn of danger. Yet, it is also used for love; our hearts are “red” and Cupid, a symbol of desire, love and passion is frequently depicted in red.

In Indian red has been traditionally used for wedding gowns yet in some parts of Africa it is a symbol for mourning. At one point in Japanese history it was illegal for anyone to wear red except for important people (not necessarily based on money) while in China red is still used for weddings and to symbolize good luck and prosperity. Eggs are often dyed red for important celebrations. 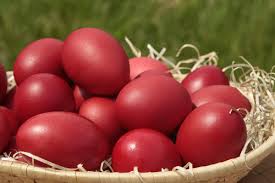 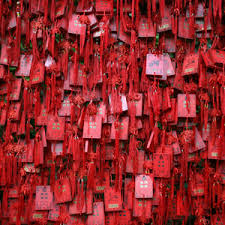 In 17th century France, Louis the XIV was very fond of red. Proud of his gorgeous legs, he wore tight pants, silk stockings and red heeled shoes. The high cost of the dye and royal edicts reserved such shoes for nobility. One can not help but notice, after his shoes, the sumptuous red cloth hanging above and around him. Louis the XIV clearly understood how to use fashion and color to make a statement.

Red dye became known to Spanish explorers who traveled to the America’s and found Mayan and Aztec Indians regularly using the color to dye textiles and pay homage to gods. It was made by harvesting a bug called the Cochineal which when smashed produced a glorious color of crimson and variations thereof. The color became widely sought after in Europe and became a major contributor to the Spanish economy. Harvested from cactus the color was “as good as gold” (well actually silver, as the dye became Mexico’s 2nd largest export after that precious metal) to those who craved it back in Europe and later India.

The bugs were brushed from cactus, dried and shipped back to Europe. Those that profited from the trade dried the bugs first in order to make them unrecognizable. Thus, back in Europe, it was not certain from where the color actually originated.  The “red” market thrived until the middle 1800’s and the introduction of synthetic dyes which made red cheap and available to the masses.

Today red is still prominent in fashion and cultures throughout the world. Over at Stashbusting SAL 2015 it is part of the overall theme in February of fabric. Sew something red in February and post pictures to our flickr group and you will be eligible to win a prize! All the details of our contest are in this post. (If you are new, you will need to join both our fb group and and our flickr group to participate.)

For me, it just so happens that red has always been my favorite color. I have been busily going through my stash and grabbing all the red. It makes me happy. I did find some older red cotton blend fabrics that I had used to make my daughter a costume many moons ago. It wasn’t the greatest quality so I used it to make this great braided fabric basket. I am quite pleased with the way it turned out, as it is very spacious and holds quite a bit of yarn. I also used 3.5 yards of fabric! BONUS.

Also in the works is a table topper using appliqued orange peel quilt blocks. Here is a great tutorial for one type of applique if you want to give it a go. The orange peel below is made with the needle turn technique.

I can’t wait to see what other Stashbuster’s do with their red fabrics. Because whatever it is, it will surely make a statement.

1 thought on “Sew Something Red.”